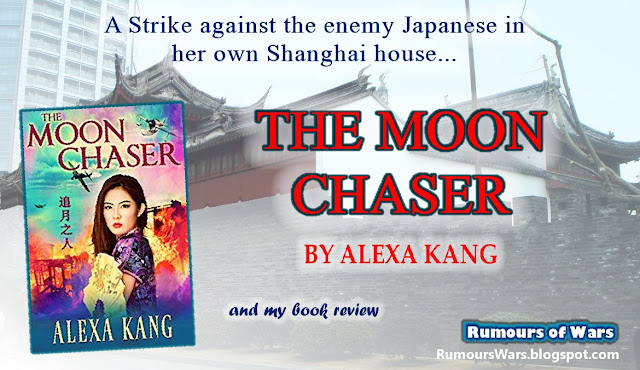 Today I am featuring
The Moon Chaser
by Alexa Kang

About The Moon Chaser:

In one night, Yuan Wen-Ying can take down the Japanese commander who slaughtered masses in Nanking. Can she set the plan in motion if she has to destroy the unrequited love of the only one remaining by her side?

After seven years of Japanese occupation, the once glamorous metropolis now lies in ruin. Sirens of air raids haunt the sky. Illnesses, starvation, and death plague every corner.
With only faint hope, Yuan Wen-Ying pledges her allegiance to the Heaven and Earth Society, Shanghai's most notorious underground resistance group. Once the daughter of a wealthy and prominent family, she now moves from one dingy hideout to the next, aiding the group in their lethal plots. Japan, she swore, would be her enemy in this life and beyond. 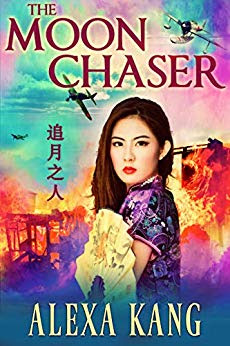 A chance has come for her to strike back against a Japanese commander who led the massacre in Nanking. The stake surges when the plan gives her a way to reclaim her ancestral home and avenge against the traitors who destroyed her family. By her side, Masao Takeda, her group's covert agent, promises to help her succeed. Could she seize the moment and deliver justice?

And will she heed the call of her heart, even if the blood of the enemy runs in the man she loves?
- - -
The Moon Chaser was first published as part of the USA Today Bestselling anthology The Darkest Hour: Tales of WWII Resistance". It is a spin-off novella from the WWII trilogy Shanghai Story, and can be read as a standalone.

"How can he be in charge?" Yao Kang asked, ignoring Huang's hopeful yet conceding gaze. "I've seen him in action many times. He makes too many rash decisions. His temperament is still that of an immature young man. If we rely on his judgment, he'll get us all killed."
"That's not true!" Huang retorted. "It's you who will get us killed. You can't see it when things go awry and you can't think on your feet."
"How dare you talk back to me?"
"I've held my silence too long. I did it out of respect for Fan Yong-Hao. Now, I can't idly watch us go down the wrong path." He raised his head at Dai Li. "General, if you choose me, I will put Kazuki and all the treacherous rats down to death's floor. I will obliterate that house. I will burn it to ashes."
Wen-Ying glanced up. Obliterate that house? Burn it to ashes? Who was Huang Jia-Ming to make these bold claims? Did he know that house was a symbol of Chinese prestige in Shanghai? A show of equal wealth and power to the Western foreigners who had taken their land? To let them know the Chinese could still rise?
But all that is gone now...
Silence! She shouted at the voice in  her head. And yet, that voice wouldn't stop. None of that mattered now, did it? It taunted her. In this war-worn city, even the Western foreigners had long since raised their white flag of defeat. What Chinese prestige was there to speak of, when the Japanese made them kneel at their feet?
"He's not the right person, General," Yao Kang pleaded with Dai Li. Wen-Ying glared at him but he didn't notice. "Please think thrice. Tian Di Hui still stands today because we abide by our rules. If you choose Huang to lead a mission over me, our members will not accept it. It we don't follow ranks and rules, our organization will fall apart. There'll be chaos. Our brothers and sisters will rebel."
"They won't rebel," Huang fired back. Wen-Ying threw her glare over to him. "Many of our brothers and sisters have been questioning your ability to lead. Given the chance, they'll give their support to the right candidate to take the seat of the First Helm. You are not the right person."
Wen-Ying watched them argue. Neither of them was the right person. At least not the right person to burn down her house. The former Yuan villa was her ancestral home. No one had the right to touch it. Liu Kun and Shen Yi had no right to occupy it. Dai Li had no right to order it demolished. Yao Kang and Huang Jia-Ming had no right to destroy it. If anyone was entitled to take it down, it should be her.

I read this first as part of the anthology, The Darkest Hour. Set towards the last year of the Second World War, this story highlights the continuing struggles of the Chinese of Shanghai against their Japanese occupiers and oppressors. It paints a vivid picture of the conditions in Shanghai at that period in time.

The author wrote her characters so they became alive on the pages. Although always a strong personality who refused to allow anyone to dictate to her, she had been a person who worked behind the scenes over the years. She had never asserted her right to lead an overt mission until her group of resisters were assigned to assassinate a prominent Japanese leader. The author wrote the action of the event in detail, and was a pleasure to read.
In addition to the power struggle that arose after the death of their former leader, the author also walked us through the dilemma the main character, Wen-Ying, faced as she began to love one of the men in the resistance group who was half-Japanese and half-Chinese. How could she love someone who bore the facial characteristics and name of the hated enemy?

I thoroughly enjoyed getting to better know the older sister of Clark Yuan, one of the main characters in the Shanghai Story Trilogy books. Only two of the three have been published. I gather because of the death of the younger sister who was still alive in the second book, and Clark being missing from Shanghai, this takes place after the third book, which has not been published. This story, as written, is a stand-alone, especially if you have not read the related Shanghai series books. For people like me who have read the first two books, I recognize the names of several characters. It prompts me to anticipate even more the publication of the third book in the trilogy.