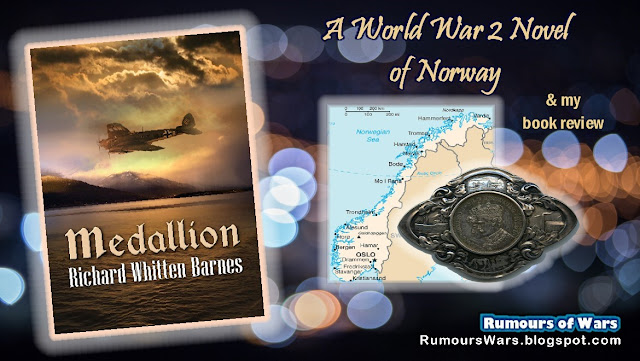 Today it is my pleasure to feature the World War II novel,
Medallion
by Richard Whitten Barnes

In April 1940 Nazi Germany makes a surprise attack on the major ports and airfields of Norway for control of the North Sea and the precious ore deposits of northern Sweden.
The attack is a stunning success, except for the Capitol city. The defense of Oslo stalls the Germans for 24 hours--enough time for the Royal Family, members of the cabinet, and the entire treasury to escape, ultimately to England.
Subsequently, Nazi aggression overruns most of Europe, looting its treasuries and treasures.

Karin Hansen, a young American fresh from a summer of barnstorming and air shows in her uncle’s biplane, has joined the British Air Transport Auxiliary--a civilian service organized to free up pilots for the war effort.
She advances from single-engine trainers to sophisticated warplanes, delivering them from factories to strategic RAF airfields.
By chance, her path crosses with that of Arne Solberg, a young Norwegian commando in the employ of the Royal Family-in-exile, who has been charged with rescuing one of Norway’s most cherished treasures from being stolen back to Nazi Germany.
MEDALLION is the story of two young lovers, and the treachery of occupied Norway. A story you won’t forget. 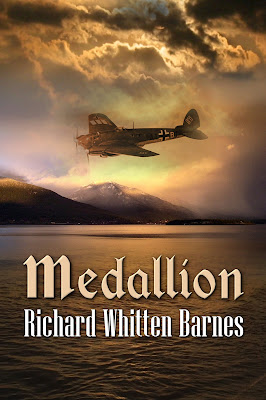 Since last July air battles were being waged in British skies as the Germans attempted to create permanent air superiority. The RAF responded splendidly. While the air battles were largely held to a draw, the British resolve surprised the Luftwaffe. By autumn there seemed to be a turning point. The bombings had diminished and the raids were mostly held at night.
“Anyone can do what we do!” Arne was saying in his accented English. “I can’t sit here in England while the Nazi boot is on the neck of our country!”
“These are the words of youth,” An older man said, not bothering to use his nascent English. “Du er naiv, min unge venn!”
“Idealistic, perhaps, but not naïve!” Arne replied in Norwegian. “Somehow, I’m going back to Norway.”
“Nils is right,” the other man said, “You’re doing enough by serving the King.” He rose. “Jegmå pisse”
The man named Nils said, “Der er en god ide,” and followed to the loo.
Arne sat staring into his glass as if an answer might lurk beneath the foam.
“Har du gjort dine venner sint?” The words came from the next table; a woman’s voice asking if he’d angered his friends. Three women in blue uniforms were laughing among themselves, glancing his way.
“I didn’t make them mad. It was the other way. Besides they only had to go to the…you know….” He studied the threesome. “You are Norsk?”
More laughter. “Just that one!” A red-headed woman pointed to a pretty girl with short-cropped brunette hair, unusual for the current styles of the day. There was something about the impudent smirk she wore that Arne liked.
“Du snakker norsk!” he said.
“Only when I must.” Karin said. “I couldn’t resist. You seemed so earnest. Where are you from?”
“A village near Bergen, and you?”
“A village in Iowa,” Again, laughter.
“Iowa? I don’t…”
“In the U.S.A. My parents were from Halden.”
Arne brightened “I know it; it is near Frederickstad, south of Oslo.”
He saw Nils returning, so he walked over to the table where the women sat drinking wine. “Are you Navy or Airforce ladies?”
The redhead pointed to the wings on each of their tunics. “ATA pilots, darlin’, and what are healthy boys like you doing in mufti?”
Arne didn’t know the word, and showed it.
“Civilian clothes,” Jan Towles clarified.
“I…uh, work at Foliejon Park”
It was well known that the Norwegian government had been established at the large estate just a few miles from White Waltham Field.
“Tell your friends to pull your table over,” Jan said.

I found this book interesting, and the plot riveting. The point of view switched between Karin Hansen, an American pilot of Norwegian descent, who in 1940 signed up as a pilot in Britain’s Air Transport Auxiliary, Arnie Solberg, a security guard for Norwegian’s exiled royal family turned spy, and Oberleutnant Horst von Prohn, an ambitious German officer assigned to Norway with more of a conscience than his superiors. Eventually, all three story lines intersect as the challenge for Karin and Arnie protecting the gold coins that form a large part of the Norwegian nation’s treasury and transporting them to safety in Britain before they can be stolen by others for their own gain.

Amidst a love story between Karin and Arnie, there are a multitude of tense moments. A key proves to be the key, and makes up a suspenseful element of the story that reads like it could end either way.

Medallion is well written, exciting, and highlights the aims of Nazi Germany in capturing Norway and the role that nation played in World War II. I also enjoyed learning more about the role of the Air Transport Auxiliary. I can highly recommend it to anyone who enjoys novels about this era.

Richard Whitten Barnes is a native Chicagoan, graduating as a chemist from Michigan State University. He is now retired from a career in international chemical sales and marketing, which has taken him all over the world. Barnes is a veteran of the U.S. Army 82nd Airborne Division and an avid sailor. He lives in Lake Wylie, S.C., but spends summers with his wife Marg and dog Sparty at their cottage on St. Joseph Island, Ontario, on the shores of Lake Huron.


Amazon link to all books
Posted by Zina Abbott Author at 12:36 AM No comments: