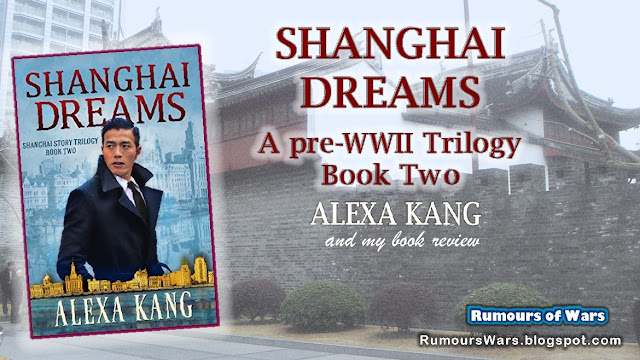 Today I am featuring Book 2
in the Shanghai Story Trilogy,
Shanghai Dreams
by Alexa Kang 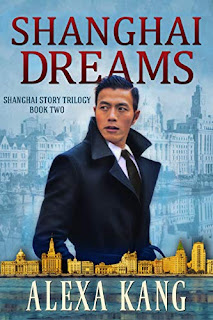 In the face of horror, his country stood alone. Japan's hunger for power shows no signs of retreat. Pushed to the edge, the Kuomintang turns to the Kremlin as its last hope for help.

To help his country succeed, Clark Yuan has to make a choice. Follow his heart and pursue the woman he loves, or give cover to a Russian princess as her paramour in a plot to sway the Soviets behind their cause?

What should a man do when protecting his country demands the loss of his dreams?

Shunned by the community for defending an innocent Nazi, Eden Levine begins the new year friendless and alone. Determined to go on, she immerses herself in work. Her singular goal to expose the Japanese navy's sordid secret and save the comfort women trapped in a living hell.

All that changes when she catches the eye of Neil Sassoon, nephew of Shanghai's most powerful tycoon.

A chance of a lifetime unfolds before her.

As the threat of war in China comes near, should she grasp the prize and promise of safety, or should she stay true to the voice within?

"When I look at all the devastation that has shattered my dreams, the one dream I will always lament losing is a chance to fall in love with you."


The fisherman steering downstream looked so small from where he stood. For a moment, Clark almost envied them. They're only worry was the day's catch. As long as they returned with a bountiful supply of fish to feed the city, they would have done their part. In the evening, they would return home, and their day's work with a hearty meal with their wives and children, oblivious to the greater forces controlling the World -- forces which could completely destroy life as they knew it.


And it was up to him to do his part so that those men and their families could continue living this way, and for the country to move ahead in the direction of peace and greater prosperity. At least that was what Sītu, his direct superior, wanted him to believe.
Just an hour ago, before he left his office at the Foreign Affairs Bureau, deputy secretary Sītu proposed an assignment for him that would set him on a course to become someone he had never wanted to be.
“Her name is Ekaterina Brasova,” Sītu said when he first showed Clark the photo of the stunning blond. Tang Wei, Clark's own friend and the
Kuomintang’s prized propaganda specialist in Shanghai, beamed with a half-jealous smile. “Princess Ekaterina Brasova, daughter of Grand Duke Michael Alexandrovich. The Grand Duke was Tsar Nicholas II's younger brother.”
“Fallen royalty.” Tang Wei’s eyes lingered on the photo. In all the years Clark had known him, he could not recall ever seeing the upright and proper Tang openly admire any woman. Then again, the beauty of the woman in the photo could move any man's heart.
Any man’s, perhaps, except his. His own heart was already taken, and there was no room left for anyone else.

In many ways this is a difficult book for me to review. Where do I start, and how do I keep from telling the whole story?


This book is the second in a trilogy. I read and reviewed the first book, Shanghai Story. You may reach that review by CLICKING HERE.


In that book I first met the major characters, Yuan Guo-Hui, known as Clark Yuan, a citizen of Shanghai from a wealthy Chinese family. In book 1, he was recently returned from attending college in the United States. The other major character is Eden Levine, a Jewish refugee living with her family in Shanghai, one of the few places in the world that accepted Jews fleeing the increasing persecution in Nazi Germany.


I know the author worried about whether or not a western audience would warm up to a Chinese hero. In my mind, she did well with Clark. She did well with all her characters. Having him go by a name he was called when a student in America, and creating him as a character pulled into a job where he interacted with Americans in behalf of Chinese interests made him easy to like. In fact, I fell in love with him in the first book simply because Clark is such a decent, ethical man interested in serving his people, but also doing the right thing by everyone, no matter their nationality.


The excerpt above introduces the situation where Clark is asked to set aside any personal relationships in order to pose as a lover for an agent working for Chiang Kai-shek’s government. His agreement for the betterment of his people meant telling Eden Levine he could no longer escort her to an important social function and cutting off social contact with her. Eden, unsure if she misinterpreted Clark’s interest in her, continues to work as a reporter for the China Press newspaper. She investigates and exposes the use of “comfort women,” Korean women (Korea had been captured by Japan in 1910) brought in to provide sexual relief to Japanese military men stationed in Shanghai. She also meets Neil Sassoon, a wealthy fellow Jew who wishes to marry her. She balances his sometimes questionable attitudes and actions against the knowledge that if war broke out in the region, the Sassoon family had the financial recourses and connections to get her family to safety.


Much of the story dealt with the growing animosity of the Japanese towards the Chinese. The author explained how Japan had been able to get such a toehold in China in the following excerpt:

“They're using a loophole in our law for allowing foreign militaries on our land. The law was passed a long time ago, right after the fall of the Qing Dynasty. The Western countries demanded it so they could place troops here to protect their people and their assets. Japan is using that law as an excuse to deploy and mobilize their army here. It's making people very nervous.”

I particularly enjoyed reading the author’s portrayal of the Japanese attack on the Chinese sector of Shanghai. I was not familiar with this region or its history, so this book was an eye-opener. The international communities (British, American, French, Italian) surrounding the Chinese Chapei district watched the death and destruction of the Chinese people in the targeted section of the city like it was a movie. I particularly liked the following excerpt that took place after Chinese forces unsuccessfully fought against the Japanese. It gives additional insight into Clark’s character:

In the office of Joseph Whitman, Clark handed him a copy of the KMT's official statement to the United States. Whitman read it over, then put it down with a deep sigh. “It's not in anyone's interest for a full-fledged war to break out.”

“No it's not,” Clark said. “But if an enemy country intrudes upon American soil, takes over Boston, then mobilizes their army from there on down to New York, what would you do?”

Whitman folded his hands on his desk. Since the conflict in Wanping had deteriorated into a full-scale fight, Japan had dropped all pretenses of peace. The fight had escalated into a bloody battle. And now, four weeks later, the Chinese Army was in retreat. Japan had now pushed their way down to Peiping and Tientsin, taking over the railways up to the border of Shanghai.

“If another country attacked America and their troops were surrounding New York, would your president agreed to withdraw all your troops from New York as a condition to a ceasefire?” Clark asked. He'd never spoken so curtly to his American friend.

“No. I suppose not.” Avoiding Clark's gaze, Whitman fiddled with his hands.

Whitman turned his head. Yesterday, the international community and Shanghai had called an emergency conference. When Britain, France, the United States, and Italy proposed a ceasefire, Japan demanded China withdraw its troops from Shanghai.

What Japan was asking was outrageous. Yu Hung-Chun, who was Shanghai's mayor and the Chinese representative at the conference, rejected the demand. The copy of the letter Clark gave to Whitman just now officially confirmed Generalissimo Chiang's stance to decline Japan's demand.

“We continue to support pacification. There hasn't been a formal declaration of war by either side. Until someone declares a war, it would be an aggressive action by us if we step in. We have an intense desire to maintain peace everywhere. Secretary of State Hull would be glad to continue informal talks with both sides to resolve this.”

The author wrote Clark as a character who had spent enough time in the United States to understand the mentality of most of the American people. However, I do not think he was surprised at the typical diplomatic baloney he received from the American representative in Shanghai. Like the rest of the European international community in the city, the man represented a nation that did not really care what happened to the Chinese people as long as its interests and citizens were not negatively affected.


As for Eden and Clark, I am certainly happy this book is part of a trilogy. I look forward to the third book where I hope things work out well for them.

You may purchase Shanghai Dreams by CLICKING HERE.

Posted by Zina Abbott Author at 3:09 PM No comments: