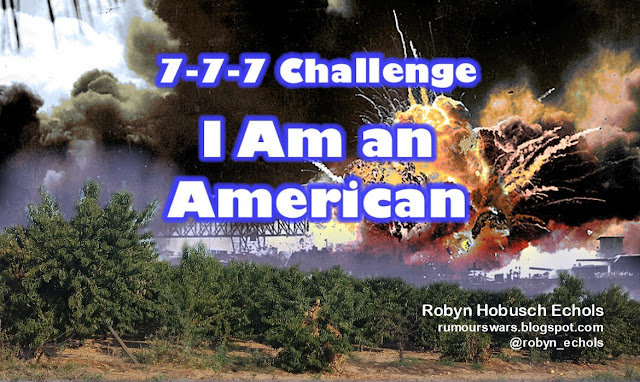 Every several months on Facebook, authors will start a round-robin challenge call
7-7-7.
We are to share seven sentences (or paragraphs, if short) from the seventh page of our current work in progress, then invite seven other authors to join the challenge.

I Am an American,
although theoretically finished,
is still a work in progress since I am now in that not-so-fun stage of editing.
My copy and content editing notes were recently returned, so it is time to get busy and make the corrections.

But first, here is my 7-7 offering for
I Am an American:

Pride crept into Ellen’s voice. “Yes. I'm Nisei, born in America. I'm an American citizen, same as you. But, we celebrate Thanksgiving to remember the Japanese experience of our family coming to America after we became Christians.”
“That makes sense.” Flo paused as a question popped into her mind. She held out a hand to stop Ellen from entering their Trig classroom long enough to ask. “Ellen, are your parents American citizens too? Or do they still consider themselves Japanese?”
A cloud of sorrow descended upon Ellen’s face. “My parents are proud to be born Japanese, but came to the United States willing to become Americans. It's the government that won’t allow them to be citizens.

I Am an American is scheduled to be published as part of box set of stories written by authors from around the world and will be available in November, 2016.
Posted by Zina Abbott Author at 12:00 PM No comments:

Email ThisBlogThis!Share to TwitterShare to FacebookShare to Pinterest
Labels: editing, excerpt, I Am an American

Charts for I AM AN AMERICAN 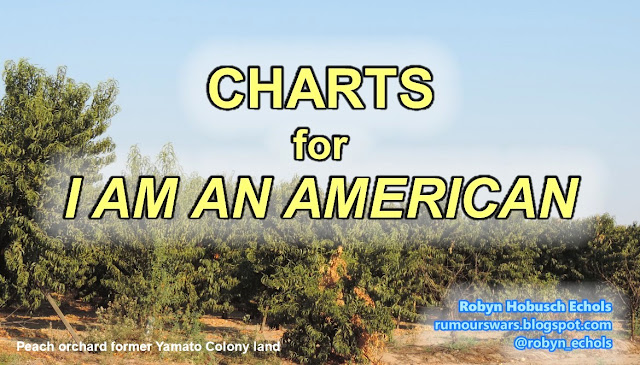 Once I decided to write a WWII series, including following up with what happened to the people of the Yamato Colony,
I did not get far into my writing of
I Am an American
until I came to a point when I realized if I want to know where my characters will end up during the years of World War II,
I need to know where they are in December, 1941, the time frame of this story.
First off, the families grew.
In the timelines I developed in early August which you can see by CLICKING HERE,
I originally had only three siblings each in the Osaki and Kaufmann families. I have since added Lily Osaki, a younger sister to Ellen who as I continued writing away ended up playing a key role in this story.

Also, I learned more about the Japanese who came to Yamato Colony in the early days. Most came as young single men who ended up sending for a Japanese "picture bride" approximately ten years younger than they were once they got their farms up and running. I realized Hiro coming as a young boy would not have been typical.
I also added John Kaufmann.

He plays a minor role in this story, but I have plans for John a few years down the road.
Then came the chapters where each family listens to the radio broadcast of President Roosevelt's declaration of war the day after
Pearl Harbor was bombed.
That was the point I needed to know where each of the siblings were in life. I love charts, and came up with this for the Kaufmann siblings:

And here is the chart for the Osaki siblings:

As for the banner, one of the food crops grown in the Yamato Colony was peaches. Today, many of those orchards have been replanted with almond trees. However, I was able to find a few peach orchards within the boundaries of the old Yamato Colony. Unfortunately, the peaches have been harvested for the year, so all I have are leaves barely beginning to turn. 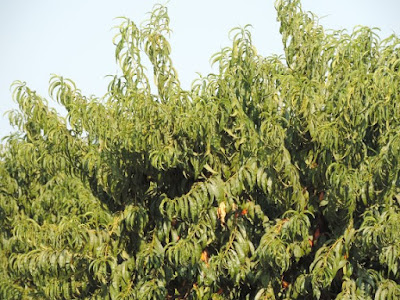 Posted by Zina Abbott Author at 10:00 PM No comments:

Email ThisBlogThis!Share to TwitterShare to FacebookShare to Pinterest
Labels: I Am an American, peach orchard, WWII, Yamato Colony

This post was first published on my
Robyn Echols Books blog
on August 6, 2016. I have reposted it here in order to keep all my posts on my WWII writing in the same place. 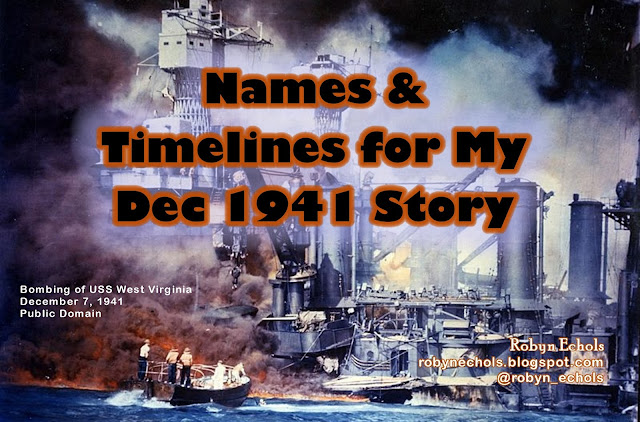 My latest writing project will be under my actual name, not my pen name. It is a novelette which will be part of a boxset being published to commemorate the 75th anniversary of this war.

My interest in writing stories about World War II started with my desire to share a bit of my father’s experiences in that war. However, he did not serve until the end of the war. Also, he fought in the European Theater.

This project deals with the month the United States became involved after the bombing of Pearl Harbor. To citizens of the United States, Pearl Harbor seems to be the outstanding event of that month and year. However, this collection is being written by authors from around the world. Included stories will share events that happened worldwide that month.

For my offering, I chose an event close to home connected to the war in the Pacific.

I had been researching, but realized after becoming familiar with the names of the big players involved, and the general timelines of the era and place, the next thing I needed to do was select the names of my characters and work out their timelines.

Here is the timeline for my Kaufmann family:

Florence Kaufmann may have had ancestry on her mother’s side that dated back to the American Revolution, but her father was a first-generation American. His parents immigrated to the United States shortly after the formation of Germany as a united country when there was still a lot of upheaval in that part of the world. I didn’t need to do a lot of research on those particulars since that is a situation that affected the German (Prussian) line of my family.

Here is the timeline for my Osaki family:

This family took a little more work to put together. It is entirely fictional, although the Yamato Colony in California’s Central Valley where this family in my story lives and works is not. There were more than one Yamato Colonies (Yamato means “Japan”) in the United States, but this one was near the west coast.

These timelines were important in helping me get the details of my story correct. For example, I had hoped I could write Ellen as a second generation (sansei) Japanese-American. However, based on when this colony was formed, it didn’t work. She is a first-generation citizen born in the United States (nissei), but her father who came from Japan as a child is not a citizen (issei). These distinctions made a difference in how I wrote the story.

Another note about naming practices at this time: I noticed as I looked at 1940 U.S. Census records and other records of Japanese-American families from that era many of the children had been given both an anglicized name and a Japanese name. For example, although I didn’t write it on this timeline, Ellen’s full name is Ellen Naoko Osaki and her brother is John Hikeo Osaki.

Speaking of names, this topic and style of writing will be entirely different than my stories already written under Robyn Echols. I am considering using Robyn Hobusch Echols for my World War II books. What do you think? Please feel free to leave a comment about what author name I should use.
Posted by Zina Abbott Author at 8:34 PM No comments:

This blog is intended to feature the written works of
Robyn Hobusch Echols
regarding stories set in the wars of the twentieth century.

And ye shall hear of
wars and
rumours of wars:
see that ye be not troubled:
for all these things must come to pass,
but the end is not yet.
Matthew 24:6 KJV

Please note that the blog address is spelled
rumourswars.blogspot.com.
Even though I generally use the Americanized spelling of "rumor," for the blog name I stayed with the spelling found in the
New Testament.

It will be awhile before I gussy up this blog with a banner, sidebars and gadgets. I am struggling to finish my manuscript for
I Am an American
my debut story in my
Rumours of Wars
series.
Posted by Zina Abbott Author at 4:03 PM No comments: