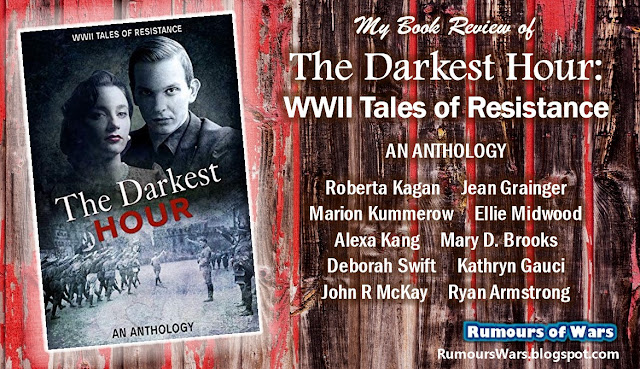 Today I am featuring this anthology,
The Darkest Hour: WWII Tales of Resistance,
containing ten stories by authors well-known to many readers who love novels about the world wars. 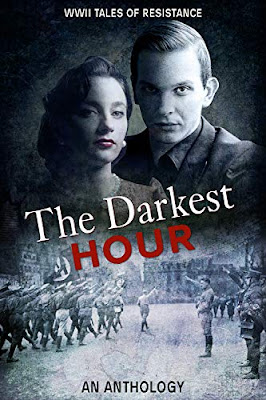 When the world falls to terror and tyranny reigns…

...how far would you go to resist?

Would you risk your own life or the lives of the ones you love?

From a young Jewish woman in love fighting her way out of the Warsaw ghetto, to a Czech assassin rising above his fears for an attempt on a Nazi Hangman’s life, to a daughter who vows to avenge her family by taking down a Japanese commander, and a French boy's touching act of defiance no matter how small.

Come and get a glimpse of the invisible side of WWII - the Resistance, those who refuse to bow down to brutality.

Hold your breath and hope for the best in the darkest of times, when our heroes and heroines risk all to defy evil so the light of freedom will shine over their countries again.

My Book Review of The Darkest Hour:

If you love World War Two stories—whether they are romance, action-adventure or intrigue, you will want to read this book. I read eight of the ten stories which I will touch on below. I have read several of Alexa Kang’s stories, so although I have not yet read her contribution to the anthology, I have confidence it will be a story worth reading.

A young woman, Shayna, visits her Jewish grandmother who survived the Warsaw Ghetto. The grandmother tells the story behind the picture of her when she was much younger. Shayna recognized the man in the picture is not her grandfather. Ruchel experienced much loss, suffering and a change from being a very conservative Hassidic Jew to a resistance fighter. She also experiences great love. The words of Azriel as he encourages her to flee the city with his brother, but insists on staying behind himself impressed me: “I have to live with myself. And a man is nothing if he has no character. If his word has no meaning he has no substance, no purpose for being.” This story is a must-read in and of itself.

This is a tale of espionage which starts in 1938 as Catroina searches for her news reporter father who uses his nationality of an Irishman from a neutral country to move freely around Europe. Her search takes her to German-held Belgium, the homeland of her mother’s family. There she makes some tough choices regarding a man she has come to love. This story had a bit of a slow start, but a fantastic middle and end. It is definitely a must-read.

Marion Kummerow is one of my favorite WWII authors. Her book is a stand-alone story. However, because I have read almost all her books, I recognized this character who made a walk-on appearance in another one of her books. Set in 1944, this story about Sabine highlights how German citizens often found themselves as much victims of the Nazi regime as anyone else. Forced to work in a munitions factory to support the war effort, her neighbor, a Nazi informer, attempts to recruit Sabine to spy on one of her co-workers. When Sabine refuses, the Gestapo arrests and tortures her husband. Told she must do what they demand if she wants him back alive, she loses almost everything else she and her husband worked to gain and reluctantly spies for the Gestapo. She soon faces a choice of who she will save and who she will leave to be captured by the Gestapo. No matter what she did, there were deadly consequences for someone. The story left me questioning myself regarding what I would choose to do.

Killing the Hangman by Ellie Midwood:

Set in 1942 in the Prague Protectorate of Bohemia, a Czech nationalist, Jan, and his compatriot, Jozef, are tasked with assassinating the Gestapo leader assigned to Prague who came up with the death camp solution for the Jews. The author developed a great plot leading up to the assassination attempt that went wrong, and the consequences to the involved parties afterwards. Her characters were realistic, and a bittersweet romance added to the story.

Enemy at the Gate by Mary D. Brooks:

This coming of age story set in Greece will set on edge the teeth of any parent who has raised an obstinate, know-it-all thirteen year-old girl who doesn’t always understand the full consequences of her actions and sometimes doesn’t know when to keep her mouth shut. On the other hand, this heroine was fiercely loyal to her family, and determined to rid her country of the hated Italians she considered stupid, even as she realized they would soon be followed by the more detestable Germans. She reacts to the loss of her father and three older brothers to the war by ignoring the pleas to not get involved given to her by a mother attempting to save the life of her one remaining child, even though she is involved with the resistance movement herself. In the end, her bravery and dedication to her country won me over.

Set in 1942-43 France, Nathalie leaves her home near the Pyrenees Mountains to go to live with her aunt and uncle in Paris in order to be of greater assistance in the resistance movement. Asked to work mostly as a courier, she falls for a man still mourning a woman he loved who had died trying to smuggle Jews out of the city. Given the code name of Camille, she is given a potentially deadly assignment to help an important figure in the resistance escape. The situation becomes more precarious once the resistance cell leader realized they have a traitor among them. I enjoyed Nathalie’s story of espionage and unexpected love.

This was another coming of age story set in Paris, France, of how a thirteen year-old boy, Charles, chose to resist the occupation of his city by the Nazis through graffiti. His character was written to make him believable—too trusting of his friends, making foolish mistakes, not realizing the full danger he placed himself and his family in with his activities—yet his dedication to finding ways to resist, no matter how small, made him admirable. Very good story.

Sound of Resistance by Ryan Armstrong:

Another Charlie, I had to empathize with this sixteen year-old American who ends up being sent to live with his father in Germany after his mother’s death. In 1940, America is still a neutral country, but that does not mean Germany has any love or respect for Americans. Charlie soon finds out his father is intent on driving out anything that marks him an American, including getting rid of his American clothes and destroying his record player and records of the jazz music he loves to listen and dance to. The author made it clear the father fought his own demons which included also loving the music he felt bound to suppress because it was “Negro music” and was distributed by Jewish businesses in America. Both father and son want the same young girl—one for love and the other for sadist possession. Charlie found a way to fight back against his father’s oppression and threats of violence. The story had a good ending. There is not much that is subtle about this author’s writing style.

At 710 pages, this anthology brought me hours of reading enjoyment. What a bargain!


This book is available in both ebook and paperback formats.

Purchase links for The Darkest Hour: WWII Tales of Resistance: